“The Sound of Silence” is a folk rock song by Simon and Garfunkel. Although it was first recorded in the 1960s, the lyrics have arguably become more relevant today than ever before.

I've come to talk with you again

Because a vision softly creeping

Left its seeds while I was sleeping

And the vision that was planted in my brain

Within the sound of silence

In restless dreams I walked alone

'Neath the halo of a street lamp

I turned my collar to the cold and damp

That split the night

And touched the sound of silence

And in the naked light I saw

Disturb the sound of silence

And echoed in the wells of silence

And the people bowed and prayed

To the neon god they made

In the words that it was forming

And the sign said, "The words of the prophets

Are written on the subway walls

And whispered in the sounds of silence

When I finished listening to this song, I had one of those exciting “aha!” moments where the pieces come together and the initially ambiguous title began making so much sense. This song left such an impact on me because it’s loaded with existential angst (yes, I’m slightly too masochistic). There is beauty within the truthful reflection of the melancholy that underlies the chaos in our world. The melodic simplicity and repeated guitar arpeggio pattern beneath the whole song allows the listener to focus on the lyrics, where Art Garfunkel and Paul Simon seem to be having a musical dialogue about silence. This, combined with their distinctive close-harmony singing, creates a uniquely haunting sense of intimacy.

As with all songs, lyrics can be interpreted differently, but this is my understanding:

The narrator in the song has a sudden epiphany and awareness that awakens him from this superficial world. He is desperate to warn us of this self-destructive route so we become less ignorant and rebel against the systems in society. This is why the song carries on to paint a powerful and frightening picture of our modern capitalist society, one that has alienated and driven us apart. The lyricist, Paul Simon, alludes to the issue of the large influence of mass media, which has essentially enslaved and silenced us – breeding loneliness and undermining the quality and meaning of our lives.

The more that I listened to it and read the lyrics, the more that the deeper meanings and philosophical connections unraveled...

Here, Simon may be alluding to how we have become incapable of effectively communicating with one another. Our culture has become fake and shallow due to our prioritisation of the ceaseless pursuit of material wealth. As life becomes increasingly comfortable, we have a tendency towards excess and begin to seek even more luxury. Ultimately, we embark on a seemingly interminable path towards greater conveniences and comfort. Consumed by the pursuit of this, we no longer have the time to pay real attention to one another. The perceived unimportance of deep relationships as compared to the pursuit of material wealth has caused us to become more self-absorbed and lost in a myriad of self-involved problems. We are more detached from each other as many can’t be bothered to have heartfelt conversations and spend the effort to connect and form meaningful relationships. Others may be scared to open up and be honest. The oxymorons used in this line reflect this conflict between spiritual and material value. Through this, Simon conveys that we work hard to achieve material prosperity and success as defined by society because we believe that this will lead us to happiness — yet the reality is that we are actually running further away from authentic happiness because we have ignored the true goal and meaning of life.

A way to interpret this line is that he is criticising the music industry that is depriving musicians of their freedom of expression. This is because the goal of the producers is to simply obtain popularity and maximise monetary profit. There are also many people involved in the production of a song, so the final published work has been changed to the extent that it is rarely a true reflection of the original artist. Resultantly, authentic art is perishing in our society, and we are prevented from realising our individual creative potential. This concept can be extended to our capitalist society as a whole and the division of labour, for example in manufacturing processes. Products created by workers are dictated by their employers and aren’t under their direct control, creating a sense of disconnection from their work and from each other. There is a subsequent loss of genuine individuality and purity — no one is really left feeling fulfilled.

“The words of the prophets are written on the subway walls and tenement halls”.

This somewhat ambiguous description may suggest that the words and ideas that used to be meaningful and worthwhile have now been degraded to mere advertisements or graffiti in rundown public places. The substance and value has essentially been lost, alluding to the way in which we have forgotten the value of life and have become alienated from the real sense of what it means to be human.

“My eyes were stabbed by the flash of a neon light”

Simon seems to be critiquing another hallmark of our modern society – the power and potency of mass media. As social beings, our susceptibility to societal influences enables mass media to have the capacity to further alienate us. He criticises the irony of how mass communication and increased connection has become a tool to isolate people, perhaps because it makes us forget the importance of living in the present. The hostile and cold connotations of “stabbed” juxtaposes the warmth of natural light, because this “neon light” is artificial and meaningless. It is just there to distract him from his dark lonely thoughts and desire to rebel against societal norms. Thus, this also refers to the deceitful nature of our society — the way in which it prevents us from realising the emptiness and alienation in our lives.

“People bowed and prayed to the neon God they made”

This line is such a clever use of words. Simon uses biblical references to compare our commitment to consumerism and the way in which we blindly follow the media to the way in which religious people worship and obey God. However, the words “neon” and “they made” convey the inauthenticity and fragility, reminding us that this is only a false God or an illusion shaped by society. Thus, he criticises our ready acceptance of thought and opinion as provided by the mass media and commercialism.

“no one dared disturb the sound of silence”

It is clear that in this line Simon is alluding to how we tend to not use our voice and merely passively accept our circumstances. This is especially because our lives have become commanded by society, as we have fallen prey to politicians and the media, to the point where we have lost the ability to even think for ourselves. Existentialists would argue that “man makes himself”, because humans are always free to change and transcend the terms dictated by our society and external influences. Yet, many feel obliged to accept the bad conditions and choose not to exercise their freedom, perhaps even forgetting they have the capacity to do so - or out of ease and comfort merely choose not to. An example of this is our fear of speaking up, or the way in which many of us are afraid to take a stand against the norm or even question it.

Unlike most people in society, the narrator in this song is exercising his freedom. It’s written from the perspective of an observer who perceives the truth of what is going on around him. Hence, he is desperate to save us from ourselves. Despite this, he expresses how he feels like his attempts to burst our bubble of ignorance and give us the courage to speak up are futile — leaving no impact at all. This is because our desire for belonging and comfort – that is planted in our human nature – means that social pressures are often overbearing and could have more control over us than we even dare to realise. After all, as the saying goes, it is easier to swim with the tide rather than against it, and some may be content with living in blissful ignorance — even if this is inauthentic. There is a real sense of helplessness to the way in which the narrator describes how his words are almost lost or drowned out by the deafening silence, as they faintly and ineffectually “echoed in the wells of silence”. This enduring failure raises the question of whether humanity is doomed. Is it too late to reverse the damage done by our society? Can we still break free from these chains?

As explained earlier, our “silence” can be interpreted as our neglect of meaningful relationships, and our passive response to capitalist and social influences. Hence, it is our own “silence” that maintains the system which enslaves and dehumanises us. The more that we remain “silent”, the larger the influence will be and the more control the government and media will have over us. It seems to be a downward spiral, where authenticity depletes as a false sense of meaning grows. Subsequently, the narrator is in a lot of distress, urgently “warning” us that if we don’t break this “silence” now, our current situation is only going to worsen — leading us towards eventual self-destruction. 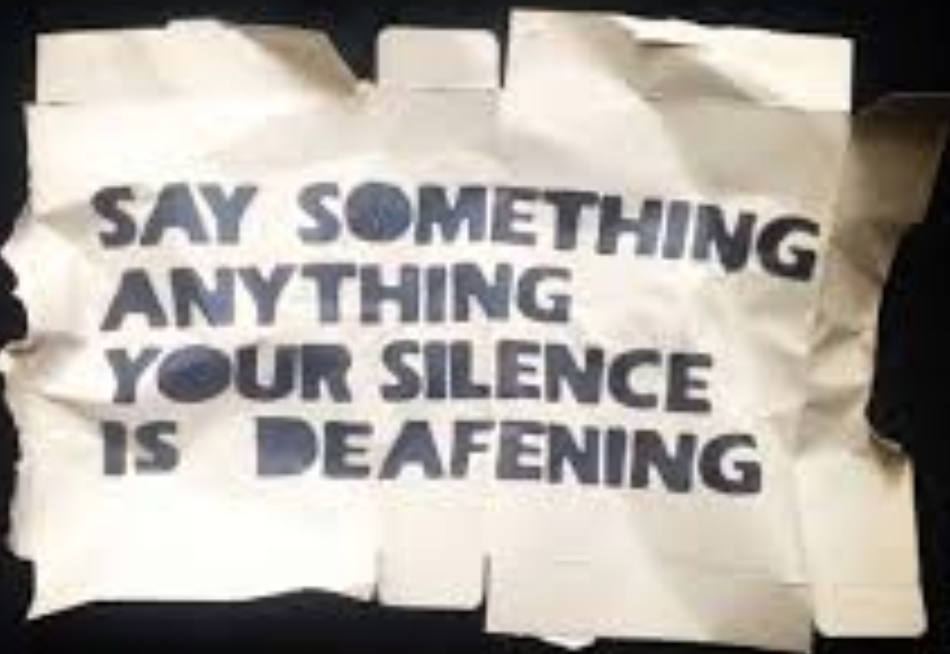 Now more than ever, I hope that we can look beyond the confines of societal norms and remind ourselves of our individuality and the importance of our own voices. The cynicism in this song and the impression of humanity’s impending doom will only become a reality if we let the "sound of silence" prevail.

Book Review: They Both Die at the End - Rhea Singh