There are more than 200 moons in our solar system, each unique to the other. This mini-series will explore the characteristics of some of the most intriguing moons, and the multitude of questions that remain answered...First up, Europa.

Europa is just one of Jupiter’s 79 known moons, but it arguably one of the most intriguing moons in our solar system. Its appearance alone is an absurd sight – obscurely resembling a veiny eyeball. Even from the telescopes on Earth, (230 million km away), scientists can observe that the surface consists mainly of ice, as it’s so reflective. Etched on its icy surface is its signature criss-crossed network of reddish-brown streaks and ridges that extend for thousands of kilometers...

In 1610, Galileo looked through his telescope and saw three stars, and later a fourth, orbiting around Jupiter. These are now known as the Galilean moons. It was a breakthrough because they were the first moons discovered outside of Earth’s moon. Perhaps even more importantly, it was proof that not everything in the solar system revolves around Earth – a shattering blow to humanity’s inflated ego.

Although Europa has been amongst human consciousness for a long time, excitement surrounding it has only magnified through the years because the Hubble Space Telescope and the Galileo space-probe have detected plumes of vapour erupting into space, shooting up to 160 km high! In November 2019, spectrography was used to confirm the presence of water in the vapour. This served as further evidence for the speculations that water-oceans exist beneath the 15-25 km thick ice surface. While Europa is merely less than a quarter of the size of Earth,

scientists believe that it contains twice as much salt-water as all the oceans on Earth! This makes Europa one of the most promising leads in our search for extraterrestrial life. It’s exciting that our science-fictional ideas hold more truth than we think, and even more so to think that we may not actually be that far from unraveling these.

In the past, when astronomers were hunting for extraterrestrial life, they explicitly focused their attention on bodies located in the ‘goldilocks zone’ – a region that is not too close to the Sun to be too hot, but also not too far to be too cold. Otherwise, liquid water wouldn’t be able to exist. However, we have since learned that the Sun isn’t the only source of heat; tidal friction from its orbital motion and interactions with other bodies releases heat within the moon’s interior. The reddish-brown streaks on Europa are actually testament to this phenomena, as large tides in the oceans below build up sufficient stress to rip the ice apart. Europa’s orbit around Jupiter isn’t circular because of its gravitational interaction with Jupiter’s other large moons, so at different points in its orbit it will experience varying amounts of gravitational force depending on its distance from Jupiter. This repeatedly stretches and shrinks Europa’s icy surface – persistently reopening old wounds, forming prominent fractures over time. 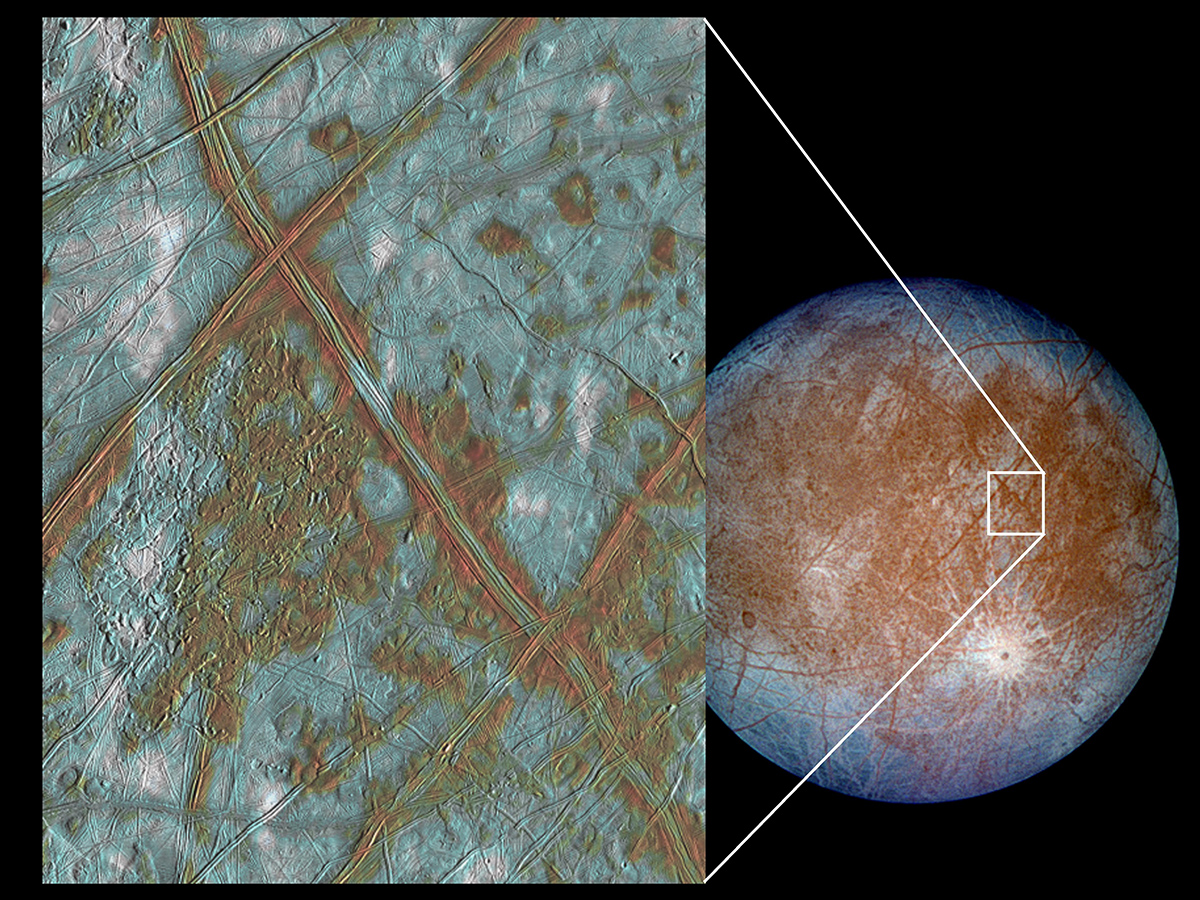 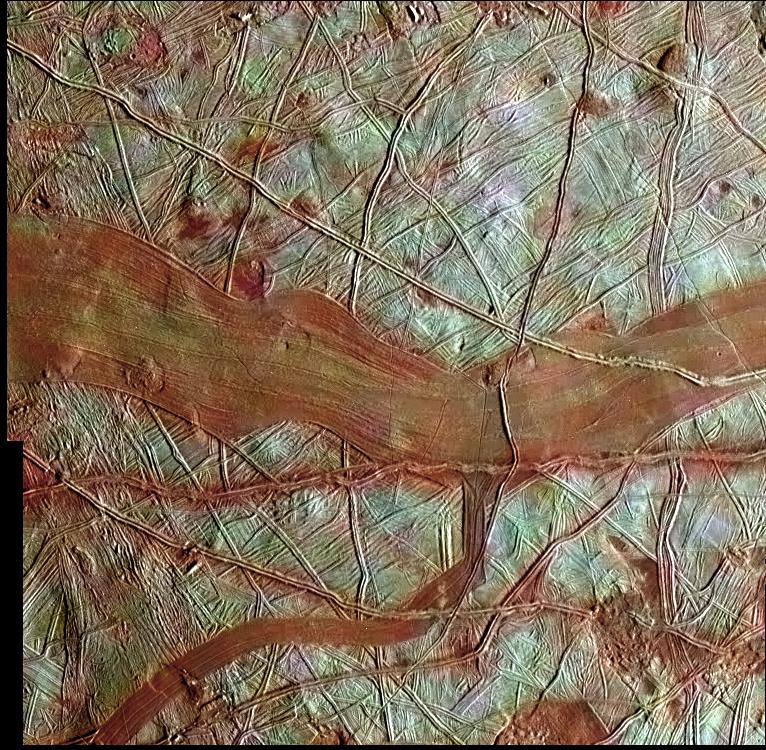 Europa seems to have the three basic ingredients for life: an energy source, liquid water, and organic compounds. The reddish-brown colour of the cracks indicate that it could be rich in salts (salt is literally added to the wound) and organic substances. The thick icy surface could also help to support life because it shields any biomolecules in the ocean from harmful cosmic radiation. We think that life on Earth originated from its oceans, where thermal activity drove geological processes to spread the minerals contained in rocks that are needed for life. Like Earth, Europa is speculated to have silicate rock lying beneath its ocean, and the ejected plumes from Europa are evidence of subsurface thermal activity.

But of course, this doesn’t guarantee anything; after all, having the ingredients needed for the recipe doesn’t necessarily mean that the cake will be baked successfully.

Since the 1970s, five space-probes have flown-by to observe Europa. However, further missions are needed to confirm the existence of a subsurface ocean and understand its chemical composition. NASA is planning to launch the Europa Clipper mission in 2025, which will conduct a more detailed analysis by flying-by 45 times.

ESA (European Space Agency), too, has scheduled the JUICE (Jupiter Icy Moons Explorer) mission to launch in 2022, but unfortunately, it will only arrive in 2029. If results prove to be promising, the next step would be sending a lander to Europa, perhaps even with a robot to swim the oceans and search for signs of life. Arguably, the greatest challenge is manufacturing a drill powerful enough to break through the 25km thick ice that covers its surface. But since when has a challenge halted scientific pursuit? NASA’s SESAME (Scientific Exploration Subsurface Access Mechanism for Europa) program, along with other private companies, have already started evaluating various penetration system designs. Hopefully, this drill can be launched by the late 2030s.

Europa, the woman who was abducted by Zeus, or Jupiter in Roman mythology, defied all odds and rose above her conditions – marking her place in this world by becoming the first queen of Crete. Europa, the moon floating in the abyss since the dawn of our solar system; a slave for 4.5 billion years, with scars to testify for the merciless gravitational pull of her master, Jupiter, the largest planet in our solar system – the king of the gods. But just like in the myths, hope isn’t lost – for this moon possesses the hidden strength and beauty for the emergence of life.

Carter, Jamie. "Jupiter’s ‘Veiny Eyeball’ Moon Europa Is Spewing Water Into Space. Will It Taste Of Life?" Forbes, 14 May 2020, www.forbes.com/sites/jamiecartereurope/2020/05/14/jupiters-veiny-eyeball-moon-europa-is-spewing-water-into-space-will-it-taste-of-alien-life/#5d6aa9576350.

Goldschmidt Conference. "Ocean in Jupiter's Moon Europa 'could Be Habitable'." Phys.org - News and Articles on Science and Technology, 24 June 2020, phys.org/news/2020-06-ocean-jupiter-moon-europa-habitable.html.

The Future of Polymers - Angela Gupta